Traveling in Europe has challenges for someone like me who has an impossibly hard time with languages other than English. And in Barcelona, I not only don’t know one language, I don’t know two. When I was growing up, I was told that there were five Romance languages: French, Italian, Romanian, Portuguese, and Spanish. If I was taught anything about Catalan, it was a dialect of Spanish. Wrong: Catalan is its own language, much like Dutch is different from German.

Barcelona may now rival my beloved Madrid as my favorite city in Europe. In no small part this is due to Antoni Gaudi. I was going to write about him here, but decided he deserved his own post.

Gaudi aside, lovely architecture abounds. There is the Catalan Music Hall, and the Cathedral, and the row of Art Nouveau houses on the “Street of Discord.” We only saw the last  in passing, as we  spent so much time at Gaudi’s Casa Batlo. Not to mention the Cathedral. Oh, and the unidentified building — appears to be late 17th or early 18th century — that has been covered with googly eyes. No, really. (Unfortunately my picture of the googly-eyes house didn’t come out well enough to show its full  bizarre glory.) And, much like Paris, some of the Metro entrances feature Art Nouveau wrought iron. 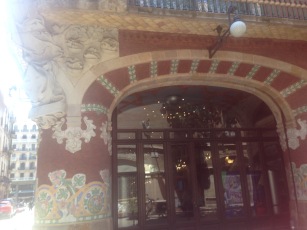 Day Three: In the morning I started off with a coffee con leche and a croissant at the cafe that was literally at the base of the apartment building we were staying in. (I have yet to find the European country where the coffee is not better than in the U. S.) I then walked around the Gothic Quarter. On my way, I saw a building that reminded me of one of the reasons I love Europe. Buildings that in America would be tourist attractions, in Barcelona are ….. bank offices. (Once, in Segovia, I saw “Charles was here, 1785” scratched into the stone of an aqueduct that dated to the time of the Romans, thus proving that people have always been people.) 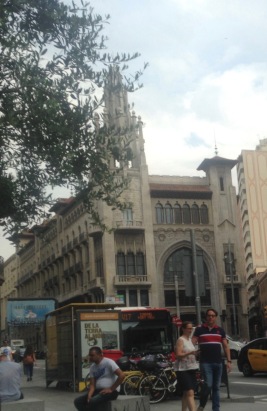 At the cathedral square, I encountered a “living statue” — in this case what appeared to be a bronze statue of Galileo. I watched him for a while, and he was absolutely still, except when a young man took picture after picture and then left without tipping. At that point a very brief expression of annoyance flashed across the ersatz Galileo’s face. Whereas I, who took no pictures but nonetheless gave the man a Euro, was rewarded by a slow, jerky change of position, a smile, and a bow.

As I meandered, I happened upon Barcelona’s City Hall, and a subtle indication of what the Spanish think of our president:

I also came across the State Archives for the Crown of Aragon. Outside the building they posted a picture of the contract Isabella signed with Columbus. It was a pretty good deative.)l for Columbus: he got one tenth of all the booty, after expenses, and for all subsequent expeditions was to foot one eight of the costs of building the ships in exchange for one eighth of the profits. Had his voyages been as successful as other explorers, he might have been a wealthy man.

And then there was this piece of public art, which seemed incongruous in the Gothic Quarter, thus proving that no country has a monopoly on WTF sculptures: 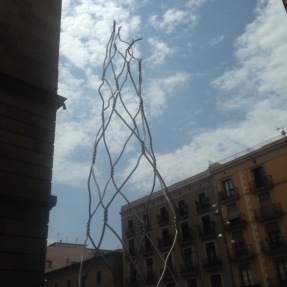 For those times when your radioactive monster chickens need to be restrained.

I was only there for a couple of days, so there was so much I did not do. I did not go to all of Gaudi’s building. I did not go swimming or snorkeling. I did not go down the Ramblas, the main tourist thoroughfare. And I could spend hours just going around the city in a cab. (Cabs are pretty reasonably priced here. If you have multiple people it’s pretty cost-effective.)

Barcelona. I may be in love.

This entry was posted in Art, Travel (real or imaginary) and tagged really cool things. Bookmark the permalink.