[This was a post I wrote while on the road, but didn’t publish, until now.] 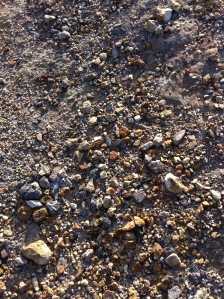 This isn’t Mars, but could play it on TV.

Today I am in Nerva, Spain. The Rocket Scientist has a project underway at Minas Rio Tinto (Rio Tinto Mine) a few kilometers away. As a result, I am sweltering in a small Andalusian town in the middle of nowhere.

Not that this bothers me: on the contrary, in every vacation you need days when you just stop and rest, especially when the temperature is 84F at 10 a.m. Sitting inside and drinking soda is just fine with me. (Otherwise, I would have walked down to the square and sat in a cafe drinking cafe con leche. There’s not a lot to do in Nerva. )

The project, like all of the Rocket Scientist’s projects, requires an analog for Mars. Rio Tinto is one such analog: a harsh, barren, landscape decimated by decades of mining by the British firm that took its name from the area. (The same British mining concern has wrought ecological havoc a lot of other places in the world, sadly. Most recently, Congress voted to allow them access to Apache sacred sites to strip mine for copper.)

When I look at the landscape, I am struck by how much beauty there is in the desolation. The colors run together, from pale sand through buff and orange and red into purple. There is beauty almost everywhere, even in a place I keep finding myself mentally referring to as “Minas Morgul.” (“One does not simply walk into Mordor… one takes an SUV to haul equipment with.”) And I am struck by the dedication of the scientists working in these conditions, especially when the temperature hit 108F, as it did yesterday. 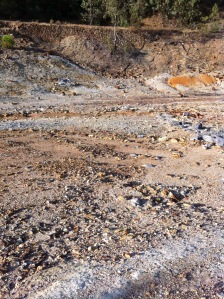 It’s like a lot of research, both space related and not: men and women willing to go to far away places, often under harsh conditions, to learn things. It’s not an easy job; I couldn’t do it, and not just because I don’t have the training. Sitting in a 108F tent in Southwestern Spain watching a drill is not my idea of a fun time. Nor is running the same drill in the Antarctic. Yes, some scientist have jobs that involve them spending time on exotic South Seas islands, but more of them involve work that is far less glamorous.

One of my pet peeves with Americans is their thoughtlessness when it comes to major scientific achievements.* These things take work, people. Yes, astronauts are heroes, but so are all the engineers and scientists who put in very long hours to get astronauts into space. People grumble when an unmanned mission goes awry about the waste of tax dollars, and perhaps they should, but they should also understand the long hours and dedication put in to get things skyward in the first place, and the grief of all those responsible who have just seen the work of years of their lives destroyed.

The Rocket Scientist was annoyed when he heard that Ron Howard was making Apollo 13. NASA had just had a serious of mission failures, and he thought that the movie would be just another “See how incompetent these guys are?” slap at the agency. Instead, the movie was, if anything, a love letter to the scientists and engineers who are always in the background but who are  indispensable to any mission. (No man is an island. That includes astronauts.)

The Rocket Scientist, and his colleagues, and his comrades-in-arms in countries throughout the world make us better off by what they do. True, not all science results in discoveries that have everyday applications (although NASA missions sometimes do), but knowing more about our planet and our universe makes us smarter. We are by nature curious beings; exploration, whether physical or scientific fills that driving need. I don’t know about you, but knowing that there is somebody out there studying mantis shrimps — a creature I will probably never encounter — makes me happy. The spirit-lifting effect of “Wow, that’s so cool!” cannot be overestimated.

I am proud that I know these men and women, and I salute them and the work they do. Besides, sending a drill to Mars to help find signs of life strikes me as somewhat a tilting at windmills, and as you know that’s an activity I approve of.

This could be Mars, too. Except for the blue sky. And the trees. And the Porta-Potty.

*Not just scientific achievements, either: Frank Gehry’s name may be the one associated with the Bilbao Guggenheim, but you can bet he had a crack team of engineers making sure that the building inspired by fish did not simply crumble into the river.

This entry was posted in Science, Travel (real or imaginary). Bookmark the permalink.