I went to Florida last week. It was partly to keep The Rocket Scientist company at a conference, and partly to celebrate my birthday.¹

We started with Orlando where RS had his conference. Orlando seems to have more theme parks per square mile than any other place in the country, probably in the world.² Universal, Sea World, everything Disney…

I remember before the theme parks. I remember when the attractions in Central Florida were things like Gatorland and Cypress Springs. Before The Mouse changed everything.

I remember when Disney World was built. I remember the trips — with my family, with the high school band, with church youth groups. I went to “all night in the Magic Kingdom” events. I remember being unable to march in one the many parades our band did there because I was standing around on a May Florida evening in a black wool uniform and shivering. (The doctor that was one of the chaperones diagnosed an severe ear infection.)

I remembering the horrible summer I spent in a program for high school seniors at the University of Florida, and the trip to Disney World. I remember sitting in the restaurant in Liberty Square in the Magic Kingdom with the young man I was sure that I was in love with (oh, Bill Buchholz, where are you now?)  with the overarching passion that teenagers feel,  but to whom I could never tell my feelings. I was on Vicodin (the previous night I had had a migraine which had landed me in the ER) and only sort of coherent. I remember telling him that Phil Spector had said he was going to produce a Ramones album. He was very excited — and explained to me how great this was, and talked about the Wall of Sound. I was terribly embarrassed when I found out that it wasn’t true, at least at that point.³

I have often said that living in place where your friends can say “Hey, let’s skip school and go to Disney World!” tends to warp a person.

Dad didn’t particularly like Disney. His knees made walking difficult, and he would have died rather than get a wheelchair or any other support. Mom on the other hand loved Disney World, and after Dad died for many years bought season passes. She would go to all the parks, but EPCOT was her favorite. Two days after her funeral, since the Rocket Scientist had to spend another few days in Florida, he and I took a Mom’s Memorial Trip to EPCOT.

Disney is in my blood.

That is why, in spite of suggestions that I go to Universal Studio and the Wizarding World of Harry Potter, I decided to hit Disney’s Hollywood Studios, a park I had often driven past but never been to.

Disney’s Hollywood Studios is a great idea for a theme park, but it hasn’t quite made it yet.4 A lot of the attractions were shows rather than rides, which I found disappointing. I also could not stay for the fireworks, which the shuttle driver assured me were the best of any in the Disney complex. That said, I loved the Muppets show, and the Frozen Sing-a-Long. There’s nothing quite like hearing a five year old lisp her way through “Let It Go.”

RS had business at Kennedy Space Center the next week, but rather than going straight to Cocoa Beach we detoured to St. Pete for the weekend. It would allow me to see my brother and sister-in-law and my nephew, The World’s Cutest Kid ™.

The room we had looked out on the Gulf of Mexico. We watched the sun set, and one sleepless night I sat on the balcony looking out at the gentle waves lapping at the shore. They’re nothing, I remember thinking — people used to the extravagant crashing waves of the Pacific would sneer. But the Gulf is my ocean, and I love it.

The view out my hotel window. It looks even better in person.

We had ice cream at the Don Cesar (the closest we could get to the pink beauty), and we drove around my hometown. I saw with elation than St. Pete is a growing city, not sliding into decay, as it seemed to be for so many years. A previously run-down area along Central Avenue — for so long filled with empty buildings, except for a few car repair shops and Haslam’s Books5 — has been transformed into the Grand Central District, with boutiques and cool little restaurants and, it turns out, several breweries. The city still has very many problems — especially in South St. Pete6 — but I am hopeful that things can get better.

On St. Pete Beach, at a restaurant called Shells, I started my coconut shrimp run. Over the next five days, I would eat coconut shrimp at four different restaurants. I would have at the other, as well, but it was a barbecue joint that didn’t have coconut shrimp on the menu.

I love coconut shrimp. And pina coladas. And flip-flops.

We had brunch with my brother and his family Skyway Jack’s7, where I was presented with a pancake with a candle while the entire restaurant sang “Happy Birthday.” Skyway Jack’s and I have history: my Dad used to take us to Skyway Jack’s even before it moved from O’ Neill’s marina. Ever since then, we would always go to Skyway Jack’s  for breakfast when we were leaving town. The tradition carried on after Dad died, and it seems to be surviving Mom’s death, too. (In any case, they have great breakfasts at really reasonable prices.) Afterwards RS and I took a quick spin around downtown to see how progress on the new Pier was going, or not, as the case may be, and to discover to my horror that they had painted the Vinoy hotel pink8,  and then we headed east to Cocoa Beach.

I’d never been to the Space Coast before. The ocean was different, that’s for sure, I thought as I looked out at the Atlantic and waves you could actually  surf. The notorious  Ron-Jon Surf shop (open 24 hours! so that you can get that longboard you’ve always wanted at 3 a.m.) was just down the road. 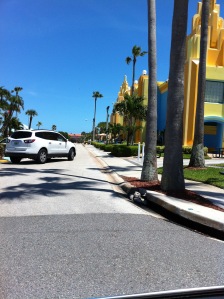 I’ve always wanted to check out wetsuits at 2 in the morning.

I opted not to go to the Kennedy Space Center, because now you have to take a tour to get in and they charge fifty bucks. So instead I sat in the Tiki Bar at the Hilton where we were staying, eating coconut shrimp and drinking pina coladas, and not doing the writing I had told myself I would do, and instead having fights about politics on Facebook. 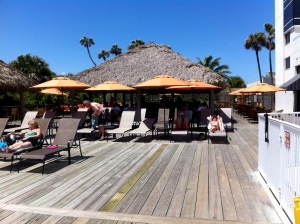 The BEST place to hang out while being flamed by extremist Sanders supporters.

We left the next day. On our way out of town, we saw what may be, as the Rocket Scientist put it, the most “Florida” thing on the entire trip: a mini-golf course with live alligators. Really. “Balls hit into the gator pit are out of bounds.” No kidding. 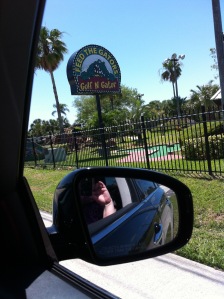 I love Florida. I love the food, I love the ocean, whichever one I’m standing in. I love St. Pete’s beach sand so white you could switch it out for salt and no one would notice.

As much as I roll my eyes about it, I love that Florida is so deeply weird.

Yes, I know. The climate, which can be no good. The politics, which are worse. It’s flatter than Kansas and any pancake you care to compare it to. It has so many problems. Yet…

I’m sad that that’s not going to happen.

¹ Y’all may have noticed that I didn’t do my usual “All the terrible things happen in April” post on my birthday. I was busy.

² No, I don’t have actual stats to back this up. I’m guessing.

³ Spector did end up producing the Ramones a couple of  years later. I laughed when I heard about it.

4There was a lot of construction going on, so maybe it will be a great theme park in about five years.

5Haslam’s is the best bookstore in the world. It’s simply huge. My father, a voracious reader, used to buy dozens of used mysteries, and then when he was done sell them back to the store. The gentleman I talked to said they really didn’t do that anymore.

6The Tampa Bay Times will help a great deal: I am hoping that the Pulitzer Prize winning investigation into the horrible state of schools in St. Petersburg will cause changes.

7Skyway Jack’s is a St. Pete tradition. People show up there in all sort of dress — they really don’t care if you looked like you have been dragged through the mud and left to dry. After all, it started out pretty much catering to fishermen and shrimpers.

8The Don Cesar is extravagantly pink. The Vinoy used to be a beautiful and sedate shade of terra-cotta, with salmon trim. Now it is the color of the Don Cesar. Pooh.

This entry was posted in My life and times, Travel (real or imaginary) and tagged Florida. Bookmark the permalink.